Our recent trip to the UK gave us plenty of time to sight-see. I admit there is a lot of my own country that I haven’t seen, so I was quite happy to do the tourist thing and enjoy the sights with my wife. One or two of the places I had seen before, but south-west Wales was one part I hadn’t visited, and there is plenty to see. One of our first stops was St. David’s, a very small city on the coast.

St. David’s is the smallest city in Britain (size and population). It was given the status of city in the 16th century due to the presence of St. David’s Cathedral, built in the late 12th century. Although it lost its city status in 1888, it regained it in 1994 at the request of Queen Elizabeth II, due to its Christian heritage and previous status. David’s importance to the church prompted Pope Calixtus II (Pope for five years until his death in 1124) to decree that two pilgrimages to St David’s would be the equivalent of one to Rome.

The image below shows Saint David’s Cathedral with the Bishop’s Palace to the left and behind. 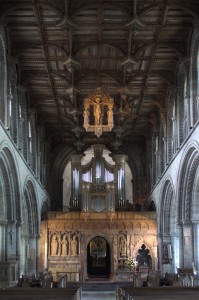 Saint David’s nave, looking East, showing the cathedral’s new organ (completed in 2000) and carved representation of the crucifixion hanging from the Irish oak ceiling. Through the arch to the choir, St. David’s shrine, and the presbytery.

To the left of the arch are the figures of Jesus, flanked by St. John and St. Paul. 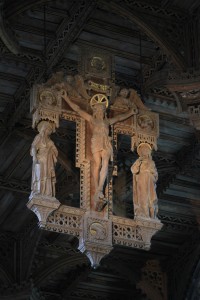 Detail of the crucifixion, hanging from the ceiling in the nave:

The choir is located directly below the tower, whose ceiling is shown below. 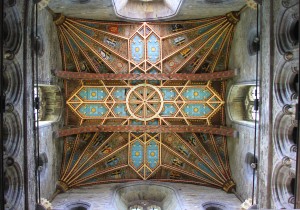 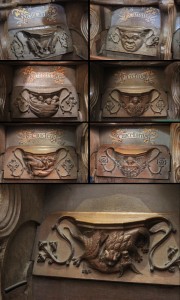 The walls around the choir boast one of the largest collections of misericords in Britain. They were carved from single blocks of oak and often decorated with amusing and sometimes grotesque symbology: beasts attacking and devouring other animals and people, serpents, faces, and even a seasick man! The seats were designed to drop down into a horizontal position and were often referred to as ‘mercy seats’ due to the relief priests would get from using them during long services. 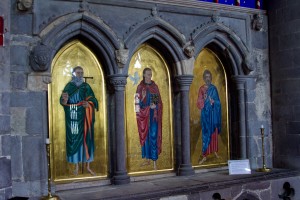 Shrine of Saint David, centre, with St. Andrew to his left, and St. Patrick to his right.

Right is detail of the pillar and section above the shrine. 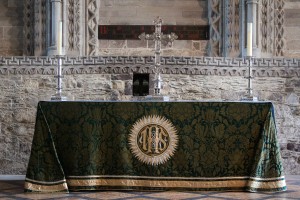 There are also a large number of stained glass windows in the cathedral, some of which are shown here. 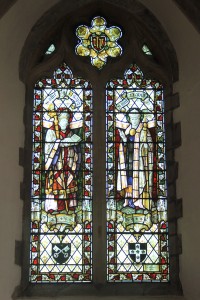 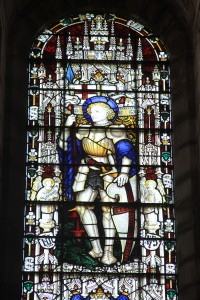 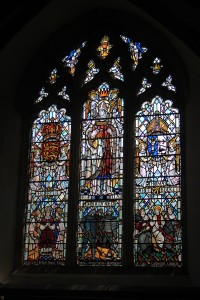 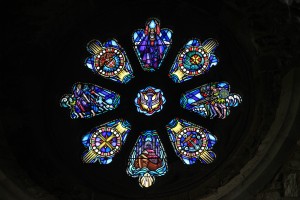 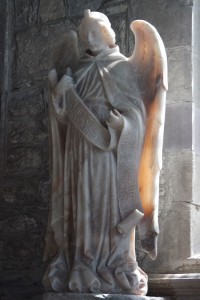 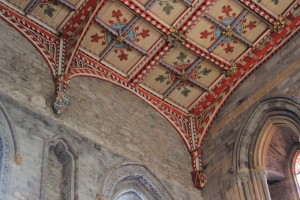 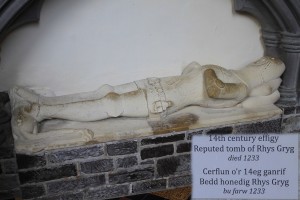 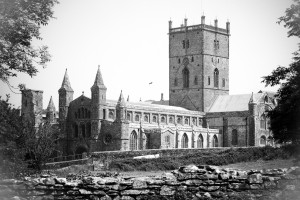