Family size increases by one.

She has a cat flap, and is free to leave the house as she needs, and nighttime is when she goes on her ‘adoption runs’. To be fair (if catching wildlife can be considered fair), she rarely kills anything she brings home–though she is partial to the taste of moths.

We’ve tried to give the birds a bit more of a chance by fitting her collar with a bell, and that has helped a lot,but there are lots of other exciting things that she can still catch if she can find the energy in the 100+ degree late-evening heat.

Crickets. She probably just loves the sound they make when they chirp away inside her mouth and she wanders around the house.

Snakes. Typically, she finds and brings home Brahminy Blindsnakes. These short black snakes look more like slippery black worms, and have been found recently in different parts of Phoenix–such as our house. They are amazingly energetic, but don’t move so quickly on hardwood floor (though not from lack of trying).

Birds. Nowadays you wo’n’t often see me running around the bedroom chasing a bird from cupboard to mirror, but I’ve been known to. I usually catch them and put them back out.

Last week I walked into the master bathroom and found April sitting on the floor staring into the corner. I stared with her, and noticed the familiar shape of a small bird, sitting staring back. I’m not sure how long it had been there, but it was clearly very alive. I picked it up and saw that it was a very young chick.  Fortunately not a nestling–it had its first set of primary feathers–but it didn’t seem particularly happy to be somewhere other than where is was before it met the cat.

It was not able to fly, but didn’t seem to be hurt, and there was no way of knowing where it came from, so rather than go outside and release it into the air (or go outside and throw it, as I’d have to do to get this little one airborne), I could only keep it safe and hope it would survive the night.

Research suggested that April had brought home a Mourning Dove, though if you look at the images below (day one of ‘adoption’) and can tell me it’s something different, please let me know in the comments. 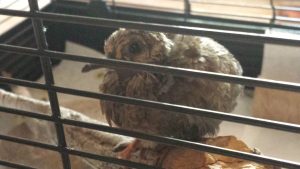 What the cat dragged in the night before

So the cat wins, this time.

I don’t think it’s fair to take it to a rescue centre–they are inundated with this type of thing, and doves are so common here that I can’t imagine them not having their hands full already.  And it’s my cat that brought it home, so I feel I need to make sure it gets the best we can offer it, until it decides to leave.

I quickly realised that the ground-up-chicken-feed paste that I had made it was not going to be enough, but what do you feed baby birds? More research suggested that my best bet would be to get hold of some Kaytee Exact. This is a formula designed specifically for young birds, and is easy to acquire. My Exact came from PetSmart, and our trip there is going to be the subject of another post–things are never straight forward.

So until the little bird is flying and ready to leave, we will be hand-rearing it. Recommended? Probably not. Little birds take a LOT of looking after–regular feeding being the biggest consideration. Check out the photo’s below to see just how much mess a little thing like this can make. 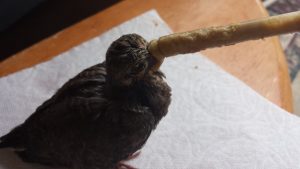 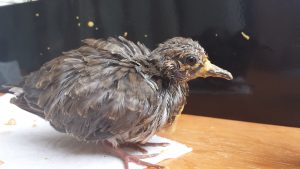 A full crop makes for a happy bird 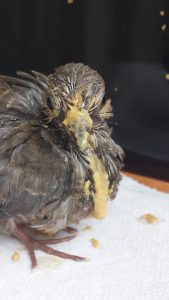 Baby dove with no table manners

Yup, that above photo is proof that someone, somewhere, will make a fortune making bibs for baby birds… This little one had to put up with some gentle cleaning after that meal.

There is always the worry of imprinting (the bird getting attached to the point it wo’n’t leave it’s oddly mismatched family, and wo’n’t know that just because it has two legs, it isn’t human). There are ways to help avoid imprinting, but we just don’t have the means. But to be sure, we are not going to just release it into the wild when it’s weaned off the formula–that would not be fair at all on the bird. More on that in baby dove updates.