Family Size Increases By One (more)

There’s a little bit of backstory to this, so if you haven’t already, go and read the first part of the baby bird story, and our trip to PetSmart.

I looked around for options for buying the bird formula, but even with Amazon’s fast shipping it wouldn’t have arrived as soon as I wanted it. So I pre-ordered (for a discount) and headed off to PetSmart, thoughts of a happy baby dove flitting around in my head.

It was noisy when we arrived; PetSmart don’t sell dogs, but owners are welcome to bring their pets. Except that wasn’t what it was all about this time–the front of the shop was overrun with dogs, most of which were behind portable fences, small, and very barky.

It was dog adoption day. 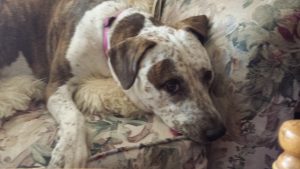 The little lady, left, is Peyton.

She was on her own behind a fenced-in area at the far end of the row of yappy, happy dogs. Very quiet, she sat looking at the person taking care of her (Hayley), but did stand and greet us when we got close. We put her on a lead, and took her for a walk around the shop–so many sights and sounds, and so many different smells! I am sure the dog liked it, too. When we were done walking her, we took her back to her ‘cage’, picked up the bird food, and left.

We have been talking about getting a dog for some time, but always seemed to have a reason not to, or couldn’t find a reason to–no excuse  particularly reasonable. As we left the car park, I turned to my wife and said “How about a one week trial?” ,and with that, turned around and disappeared back into the shop. Less than  one hour later, we watched her happily jump into the back of the Acadia, and we took her home.

The space we have at the back of the house is a decent size, and when Peyton was let loose out there, she ran as if possessed by a racehorse–clearly excited, and with a huge amount of energy to burn, she raced around me and the trees until she wore herself, out, then followed me back into the cool of the house.

The cat’s not particularly fond of her, but she’s getting used to not being the only four-legged member of the family, and as I blame her squarely for us bringing her home, I don’t worry to much about it. Besides, April knows who’s boss, and she’s not afraid to simply sit in a doorway and gloat, as the dog looks on–as unable to pass by the cat as she would be as if she were faced by a closed door 🙂

But she’s a lovely dog–so very gentle and well behaved. And earlier this week we signed the adoption forms and she officially became a member of the family. I’ll be teaching her more of the basics; she already knows ‘sit’ and ‘down’, but there’s a clicker on its way, and a bag of ‘treat rewards’, which I’m sure she’ll happily consume in exchange for learning to give a high five.