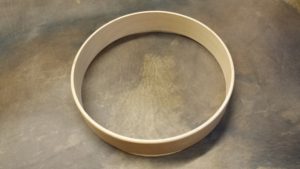 It’s a buffalo hide, thin enough for hand drums, and big enough to allow me to get a few drums out of it. A little darker than I had expected (though I don’t know why I was expecting anything lighter), I chose a spot to cut for the first one that is uniformly dark, to give me a nice canvas to paint on. I’ve yet to decide what I’ll put on it, but that’ll come to me, I’m sure.

The first drum will be made with an 18″ hoop, already sanded and sealed,  and then I have a couple more to make; a family from the Yaqui tribe, on a nearby reservation, lost their home to fire, so there will be a donation made there. All together I have an 18″ round, 17″ eight-sided, a 14″ round, and a 12″ round (that will be covered in goat hide–another gift).

I selected a spot on the hide that, as mentioned, had no real features, and set about marking it to cut. The diameter of the round was approximately 18″, plus twice the height of the sides, plus an inche to allow for it to wrap around the drum for the lacing–a total of about 26″ It will be a little bigger thn. Another off-cut of hide will allow me to make lace–between 20 and 30 feet of it, I am guessing, will be enough for this drum. The hide, dry, is less than a millimetre thick. It doesn’t seem like much, but it’s incredibly tough, and cutting it required tin snips. I drew a circle using the hoop, then added the height of the hoop to the diameter, a little extra to wrap around the underside of the drum and cut around the line drawn. Not rocket surgery, just making sure that I had enough to completely cover the face and sides of the drum.

Time to run some cold water into the bath and drop in the cut sections of hide to soak for 24 hours!

The hide swelled to a thickness of about 3 ¼ millimetres (⅛ inch), and had the consistency of a thick wet suit. The off-cut was turned into approximately 80 feet of lace that was about ¼ inch wide.  The tin snips made a reappearance as no pair of scissors I had would easily cut through the wet hide.  I placed a damp towel onto the work surface to keep the hide from drying out too fast (Phoenix is hot and dry even during monsoon season!) and had a spray bottle of water handy.

Folded the hide in half, and approximately an inch in from the edge, on the fold, punched a hole, repeating it on the opposite side of the hide. Refolded in the other direction. lining up the two small holes, punch two more holes. Opening up the hide, there are now four holes punched at the 3, 6, 9, and 12 o’clock locations. I turned the round through 45 degrees, and repeated the process, giving me 8 holes, then punched holes in between the existing ones for a total of 16 holes, ready to take the lace. 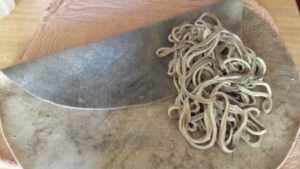 Buffalo hide round, with holes already punched, and 80′ of lace.

After lacing up the drum, then unlacing it because I’d forgotten a step, I  cut away some material between the holes, as shown below, so that when the hide is gathered, there is not a surplus of material gathering on the back of the drum (imagine a crimped bottle cap). If you don’t cut it out, then the material has to go somewhere, and it usually goes into lots of little unwanted  folds. That’s easily seen on the pictures of the laced drum taken prior to unlacing it, shown further down the post.

Cutting out the extra material between the holes

Making sure that the fur side of the hide is down (that’s the smooth side!), I started lacing by tying off one end of the length of lace to the hole in the 12 o’clock position, then threading the other end through the hole opposite. The end is then taken through the hole to the right of the first hole, then opposite, and son on, until the lacing has been threaded through all of the holes. 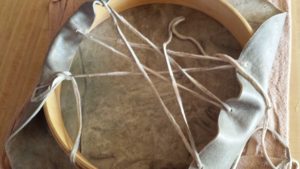 Starting to lace, working from one side to the other and back as you rotate the drum 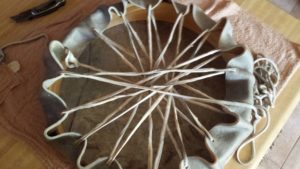 The drum, laced, before tightening it all up

Clearly visible in the photos, left, is the gathering of the material, as mentioned above, prior to me unlacing the drum and cutting out the ‘scallops’. The extra folds of hide, between the laced-up holes, would end up wrapped inside the drum. It is an option, but could result is the material vibrating against the inside of the hoop when the drum is played.

Pulling tightly on the material around the edge of the drum tightens up the face, and after a round or two of pulling the hide at the holes, I set about tightening the lace, by methodically working my way around the strands. I’d say, as a rule of thumb, the final tension can best be determined by pressing down on the centre of the lacing and the drum face. There will be a little bit of ‘give’ but you shouldn’t be able to press down much more than a quarter of an inch or so. The tension will increase as the hide dries and shrinks, but if you leave too much sag, then that sag will be taken up as the drum dries, and you wo’n’t get the final tension needed to produce the right sound. I kept working the leather around the sides of the drum, and tightening the lace as needed, until I felt that I had gotten the tension in it that I needed. I smoothed out the side, to get rid of any extra wrinkles, and then set about making the handle.

The picture is probably worth more than the words, but essentially all I did was take four of the double strands and wrapped lace around then, working from the center, out. This adds even more tension to the lace, as you tighten it by pulling in different directions as the handle is formed. After a few inches of wrapping, I wound around only the middle two, to produce the branching effect, shown. This was repeated for each of the groups of four. I’ll eventually take a rabbit skin and finish the handle.

Even before I finished lacing the handle, the hide on the edge of the drum was starting to dry, turning from a grey into the more natural brown. 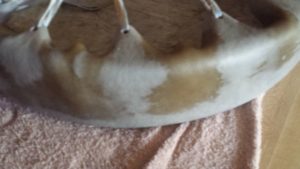 The difference some water makes. The hide returns to its natural brown as it dries

The finished drum sounds beautiful, with a deep, rich sound. The evenness of the colour was lost after stretching, so the head of the drum now has some pattering to it. All that’s left now is to wait for inspiration for a design. 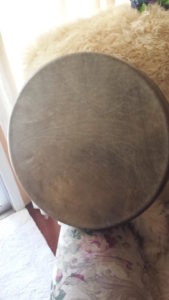 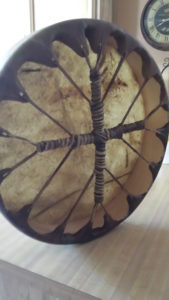 18″ Round Buffalo Drum – Front and Back

The finished drum, after it has fully dried out.

All that’s left now is to wait for inspiration for a design.